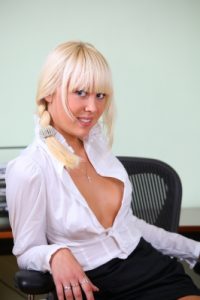 Being the new secretary and her first job, Candy tried her best to please the boss.

David was the consummate businessman who always closed the deal and cut an immaculate figure in his expensive Italian suits and silk ties. He enjoyed his life as a managing director of the most prestigious real estate firm in the country. At thirty five he was still young and considered to be a good catch.

Almost nineteen and her school life behind her, Candy liked her part time job, but had been offered another and had accepted yesterday, and now had to find the right time to break the news.

Dictation was the most unsettling part of the day as she found David to be quiet a distraction. He was handsome for sure, but was annoyingly pedantic in how everything had to be done. Candy absently brushed a piece of lint off her jacket as she stared out of the window. She jumped as she heard her name bellowed from the next office. It was already after four thirty and she was late for dictation…again!

“I swear I will get that window papered over!” David said angrily. He hated being kept waiting, especially by this young thing that pranced around in short skirts every day, making him crazy. Did she know the effect she had on him he wondered? “So sorry,” Candy said breathlessly as she took her seat. David noticed her short skirt had ridden up her bare legs and he was sure he could almost see her panties! Were they white?

Candy looked at her watch and noticed it was drawing near five o’clock. “Unfortunately, you’ll have to stay back until this is done.” This was the second time this week she’d been late so she didn’t argue. Five o’clock came and went and they were the only ones left in the office.

Candy took down all of the notes and went to get up, accidently knocking the paperclips onto the floor. “I’m so sorry.” She spluttered. David sighed as she bent over, picking up the clips one by one, providing him with an excellent view of her long slim legs and right up her skirt. Yes, they were white. Candy picked up the last of the paperclips and turned to see a strange look on David’s face.

She looked down and saw the bulge in his trousers and she blushed, not knowing where to look. David couldn’t take it anymore. “Do you see what you’ve done? What do you expect with such a short skirt.” He accused. “You parade around every day showing off those legs, making me crazy.” Candy swallowed hard. She realised he wanted her and admitted to herself that she’d had fantasies of her own. “I’m resigning!” she blurted out. “Don’t be ridiculous.” He scowled. “You don’t have to resign because of this.” He softened his tone. “It’s not the reason. I’ve been offered a job with much more money and it’s closer to home. I’ve made up my mind.” She stated, handing him her letter. “Oh, so I can’t change your mind then?” David asked cautiously. “No.” Candy said.

Slowly standing up, a thought dawned upon David. Candy was not technically his employee now. “Ok, well I’ll organise your pay tomorrow as you wish to leave straight away. Come here then and give me a hug.” Candy approached him and slid her arms about his waist and he quickly pulled her close. She moaned as she felt his hardness up against her. As quick as lightning he spun her around and she was leaning over his desk, his hand slid up her leg and pulled up her skirt, revealing her white G-string. He spanked her with his bare hand. Thwack. “You’ve been a very naughty girl, haven’t you!” he breathed. “Ow, yes.” She whimpered. “You’re going to be punished” He continued. She heard him unzip his fly and watched the reflection in the glass wall of the office.

She knew she was going to be punished mercilessly for hours and gasped as the punishment began. They do say “spare the rod spoil the child.” However, Candy was no longer a child, and there definitely wasn’t any rod being spared here….